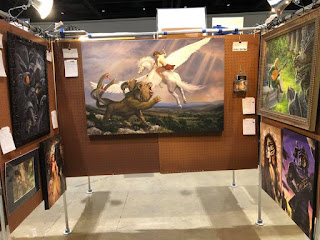 When I was starting out in fandom and in art, I used to LOVE going to SF WorldCons.  The panels with all the authors were great to attend, the art shows were huge and amazing with lots of well-known artists, many people came from all over the country and the world.

I haven't done a WorldCon in over a decade.  My friends gradually stopped going, attendance was growing lower, instead of on Labor Day weekend, they moved into August, conflicting with GenCon (I was working mostly in games, so GenCon made more sense for me to attend), and DragonCon (which I haven't been attending--but many went to this year instead, since it was the weekend after).

Since I've stopped going to GenCons, and since I could drive to San Jose, and since a friend was going, I was happy to attend San Jose's WorldCon this year.  WorldCons are expensive... but that's just how it goes with a con that moves around and can't really rely on long-term contracts and known attendance and regular workers, etc.  I was used to the price (although it's higher, of course, than it was years ago).  I was annoyed at not being able to book a room at one of the con hotels for the night before the con--they sold out right after the reservations for the blocks were opened (plus the time announced for the opening was botched in the announcement).  This was NOT a good beginning and the ConCom seemed to care less about trying to expand the dates/blocks.  I mean--some of us were driving 7 hours up and needed to be in the art show in the morning to set up!

Then there were issues with the programming being insensitive to some guests and not being inclusive enough.  They did seem to try to fix that.  There was a disgruntled attention-seeker threatening a protest and lawsuit that thankfully fizzled.

To the attendee, it wasn't as controversial as it could have been (considering all the sick puppy stuff going on in past years).

Artist-wise, it was pretty smooth.  The art show director had a lot of experience running shows this size.  And computerizing the system seemed to be helpful rather than annoying (as has happened way in the past when new systems were more untried).

There were very few book cover artists in the show.  Not too surprising since it's the East Coast shows that benefit from geography (has always been that way...  you'd think there'd be more folk living in the West and Mid-West doing big cover illustrations, but oh, well).  The art track of panels wasn't huge, but had enough to interest most, I think (I missed many, but did hit the AGOH presentation and things like that).

Since I haven't shown much over the past few years, it was fun to be able to haul some of my paintings up to San Jose to show them.  Of course, being a lazy person, I hadn't finished them, so was furiously tinkering with oils (not good!) up until packing them all up!  I only had 3 oil paintings, but they were large, as you can see in the photo of my 4 panel bay.

"Pegasus, Bellerophon--fighting the Chimera" is 32" x 48" oil on canvas.  I did it for Dan DosSantos' SmArt School class and showed it at an IlluxCon showcase, but still dabbed a bit more oil on it.

Top left, bad angle!-- "Elements: Ravens" is oil on masonite 18" x 24".  This was done for another of Dan DosSantos' SmArt School classes, with Michael Whelan as guest instructor who created that assignment for us.  (I love ravens, so it was fun to do!  It should be worked on a bit more, but I was lazy and just threw it into a frame for the show.)

The two on the bottom are canvas prints of pieces I did in the same class as the Pegasus.  Bottom right is a canvas print of "Beauty and the Beast" done at IMC (Illustration Master Class) years ago.  And next to it is an acrylic painting for the Wheel of Time card game that was also done years ago.

I did not sell any originals (they were priced pretty high, I'm in no hurry to sell, plus I still need to varnish them!  and take better photos).  I sold one canvas print and 10 photo prints/posters in the print shop.

Looking around, bidding seemed a little slow in the art show overall, but I think people came in before bidding ended and roamed around and bid a fair amount.  I didn't talk to too many others about sales, it seemed a tad disappointing to some, but not really horrible or anything that I heard.

Anyway--overall, I enjoyed it (although I miss the old days!).

Got to keep HIGHLY recommending:

Illustration Master Class (IMC) --held for a week annually in June, sells out quickly.  One of the great experiences for anyone who loves fantasy art and artists!!!
Website:  http://www.artimc.org/

And the associated online courses, SmArt School -- held in Spring and Fall, 13-14 weeks.  Amazing teachers, students and learning.  Seriously--I have a BFA in illustration and this is still SO GREAT.  Melissa Gay, one of the students in the last class I took won a Chesley Award at this WorldCon.
Website:  https://www.smarterartschool.com/

My nephew and his friends documented their high school Senior Project:  "Trying to Make a Stop Motion Animation"

The first assignment was a portrait of some kind.

Sketch of a sort of winter queen elf... (yeah, it needs a lot more thought! like can we have something a bit more detailled?  story and personality -wise?) Dan suggested maybe more of a headdress...  I couldn't make it work, snow-queen-wise... My wintery designs were crap.  So I went in another direction... Went for a more desert-like style and changed her to an antelope girl, and made her face 3/4 instead of profile... Put some texture around the doorway around her, cleaned up outfit-- More work tightening things up--jewelry, hair; put in a door so cast shadow falls across it-- This year's special guest instructors were Brian and Wendy Froud.  I've long admired their work, so I had to attend!

Those of us working with Brian were mostly doing sketchbook work... sort of concepting fairies... (some of my work, alongside others)--

Outside the World of Froud--

Building up from the armature--

(Posting old photos of stuff... after a big non-blogging gap!)

Pendragon Costumers across the aisle--

I love the IMC so much!!!  A week of wallowing in fantastic fantasy art!

IMC 2013 had Mike Mignola as Guest Instructor (although he had to leave a few days early).

A list of assignments to pick from to work on during the week (held in Amherst, MA, in June), is given out beforehand.  We bring materials/supplies/computers to work on.  Live and eat together.

Lecture on Shooting Reference, with Scott Fischer and Donato Giancola having some fun--

There are some models/drawing/painting sessions... this one has James Gurney doing some painting--

We were in the first floor painting studio.  There was also a room upstairs, and another room just for digital (darker and no paint allowed!)--

End of the week, display of work and sketching in everyone's sketchbooks--